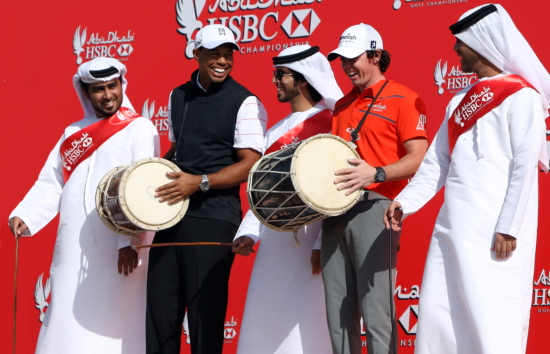 After dazzling local galleries when paired over the opening 54 holes of this year’s tournament, McIlroy, a two-time Major winner and the current world number one, and Woods, widely-recognised as the most high-profile player in the sport’s history and a 14-time Major winner, will head the battle for Abu Dhabi’s prestigious falcon trophy and a share of the event’s US $2.7m prize purse.

“Rory and Tiger are true giants of the game and represent only our opening salvo – we are actively working to bring another world-class field to Abu Dhabi and further player announcements will be made in coming weeks.”

A member of both the European PGA and PGA Tours, Northern Ireland’s McIlroy shot to the summit of the sport’s rankings earlier this year following a string of victories culminating in a staggering eight-shot victory in August’s US PGA Championship at Kiawah Island – the Ulsterman’s second Major. With four Tour wins in 2012, McIlroy subsequently played a central role in Europe’s historic Ryder Cup defence at Medinah Country Club in Chicago, Illinois.

“This will be the first time I’ve headed to Abu Dhabi as world number one and I’m determined to keep the wins coming and cement my ranking. The strength of the field means there will be a ton of world ranking points on offer so Abu Dhabi will be a really significant tournament that sets the tone for the year. I had a great tussle with Tiger nine months ago and I’m sure he’ll be in contention again. We’ve spent a lot of time playing together this year and it’s always fun challenging the best. I’ve made no secret of the fact he’s a hero of mine and there’s nothing better than tussling with your heroes.”

Having signalled his falcon trophy intentions with an imperious, bogey-free third round of 66 on his Abu Dhabi debut, a resurgent Woods was unable to halt the glory march of eventual winner England’s Robert Rock. After memorably performing a traditional Emirati ayala dance prior to this year’s opening round, Woods is eager to find his groove when he returns to the emirate in three months time.

“I had heard so much about Abu Dhabi in the past and I was very impressed by the crowds, the organisation and the overall atmosphere,” said Tiger. “I really enjoyed my time in Abu Dhabi and I wanted to return, particularly as I played well and came so close last year. I’d love nothing more than to win in January and start the season in the best possible way.”

With the Woods-McIlroy effect ensuring this year’s Championship shattered its own four-day attendance record by attracting more than 82,000 spectators to the National Course, the event’s title sponsor, HSBC, believes the stellar cast lined up for January will further cement the tournament’s billing on the international golf calendar.

HSBC Global Head of Sponsorship and Events Giles Morgan said: "Next year marks our tenth anniversary as a major international sponsor of golf and this is a great way to kick off a landmark year for us. In the last decade we are proud to have sponsored 30 tournaments around the world and the Abu Dhabi HSBC Golf Championship is right up there as a major global event and an important showcase for golf in the Middle East."

Simon Cooper, Deputy Chairman & Chief Executive Officer, HSBC Middle East & North Africa, added: "The Abu Dhabi HSBC Golf Championship has become the traditional curtain-raiser to the new season and the past couple of years have seen the event establish itself as the jewel in the crown of Middle Eastern golf. As a centre of international trade, Abu Dhabi is a very fitting location for this high profile HSBC event. With the support of local governments, this region is now a major player on golf's global stage - 2012's event witnessed the strongest field ever assembled in the Middle East - and we're anticipating an even stronger line up for 2013."

One of the family-friendly tournament’s key off-course attractions, the 12,000m² Championship Village, will once again bring a fantastic range of activities, attractions, prizes, games, competitions and live performances to complement the National Course action.

Fans will be able to enjoy the popular HSBC Interactive Zone, which offers a variety of sporting activities reflecting the diversity of the bank’s global sports sponsorships and allows participants to test and hone their swing and putting techniques, while non-golfers can spend time in the creative area.

Several innovative promotions introduced this year are also back. As well as a family-friendly picnic day on Friday 18 January, the popular ‘Dress in Red Day’ returns on Saturday 19 January. Any visitor with red in their outfit - whether something simple like a red hat or even red accessories – enters free on the Championship’s penultimate day. Additional crowd-pulling initiatives will be unveiled in coming weeks.

With Championship tickets priced at AED50 (US$13.3) for a daily pass and AED150 (US$ 40) for a four-day pass, Emirates Golf Federation members and children under-18 – when accompanied by an adult – enter free. HSBC customers can redeem exclusive ticket offers by simply presenting their cards at the entry gate during tournament week. Premier card holders can redeem family ticket access, while regular card holders can claim two daily tickets.

Tickets are available via the event’s official website – www.abudhabigolfchampionship.com - as well as online at www.timeouttickets.com. Customer service can be contacted through the ITP toll-free hotline 800 4669, or for international visitors, +971 4 444 3459. Tickets can also be bought at the gate throughout the Championship.

To boost the event’s social media penetration, revamped Abu Dhabi HSBC Golf Championship Facebook and Twitter pages are already active and will feature a host of competitions, as well as regular updates about the tournament and field.

To woo international visitors, Championship organisers have also launched a series of attractive visitor packages which are now available via Golf In Abu Dhabi – www.golfinabudhabi.com. The packages include Championship tickets and the opportunity for visitors to extend their stay and play Abu Dhabi’s diverse golf courses. Packages also include Championship season passes, airport transfers and hotel-Abu Dhabi Golf Club transfers.

Email ThisBlogThis!Share to TwitterShare to FacebookShare to Pinterest
Labels: All posts, PGA Tour