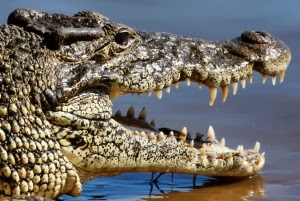 A Toronto man is lucky to be alive after being attacked by a crocodile on a golf course in Mexico.

Dougie Thomson was playing a round at the Iberostar golf club in Cancun, near a lagoon, when “I heard this rustling and this thing was snapped right on my leg.”

It was a crocodile, and it refused to let go.

“Then it started going backward into the lagoon, taking me with it,” Thomson told CBC News from Mexico, where he is recovering in hospital.

Thomson’s golf partner and others rushed to his aid.

“I had broke my club over its head,” said Brendan O'Hara, and another man rammed the animal with a golf cart. It eventually let go and the golfers made their escape, though the crocodile was in no rush to leave.

It remained for “at least an hour” by the swamped golf cart, said friend Gordon Victory, and the course remained open.

“They still let people play behind us,” said Victory.

This is not the first crocodile attack on the Iberostar course. An American golfer lost fingers in an attack this past September and is suing.

The club says crocodile warning signs are posted and Thompson is welcome to a free round if he decides to play there again.

Thompson will fly back to Toronto on Thursday.