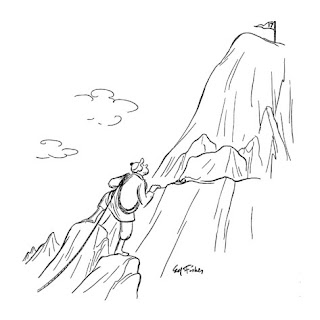 For those among us whose desire for adventure outweighs the pressure of self-preservation have I got a trip for you! This one comes to you courtesy a sparsely populated, but famously potato state. Any idea which I am talking about? If you said Idaho, you’d be absolutely right! Located just inside the eastern edge of the Pacific Northwest, Idaho has a lot to offer those looking to get away from the hustle of city life. With over 83,000 square miles (mostly undeveloped) Idaho is a rare gem in the lower 48. Perhaps that’s why it’s referred to as the “Gem State”?

One of the best hikes in the state of Idaho is the Mt. Borah hike. At a little over 12,660 feet high, Mt. Borah is Idaho’s tallest mountain. Even for those who are in good shape, this hike can take a whopping twelve hours to complete from start to finish. Although the hike is strenuous, and at times downright dangerous (case and point - Chicken Out Ridge), but the views and freedom you experience once reaching the summit can only be compared to pure bliss.

When I made the summit in July of 2012 I witnessed firsthand a favorite past time some Mt. Borah hikers partake in, teeing off at the summit. As if the hike wasn’t bad enough already, people actually decide to haul golf clubs all the way up the mountain, and although I certainly do not encourage such behavior (for safety and environmental reasons) I will say this: if you’re going to do it, be smart. Make sure no one is climbing the mountain in the direction you’re teeing. It may not look like it, but people are able to ascend the mountain from more than one route, and use a bio-degradable ball. Here are a few I’d recommend.

The Eco Golf Ball - The Eco Golf Ball is made from 100% biodegradable wood. Originally designed for use in or around bodies of water the Eco Golf Ball meets all MARPOL V regulations and is actually approved by the US Coast Guard to be hit into the ocean. If left alone this ball should naturally degrade within a 3-6 month period.

UMaine’s Lobster Shell Ball - The lobster shell ball is produced by UMaine’s very own The Lobster Institute. Originally designed to be hit into the sea the lobster ball is made from waste lobster shells left over from the canning industry, a by-product that would otherwise be more waste in the landfill. These balls don’t fly as far as a regular ball but for the special summit tee off, or other non-retrievable tees (like the ocean) the lobster ball is the perfect solution to preventing pollution.

The Ecobioball Golf Ball - Albus Golf has produced the first 100% biodegradable golf ball that has a core made from fish food. The ball begins to degrade as soon as it touches water. Within 48 hours of initial exposure the entire shell should be gone and the inner core, made from fish food, is available for fish to eat. The idea behind this ball is that you shouldn’t just make a ball degrade; you should also give benefit to the fishes.

Final Thoughts Bring lots and lots of water, a sports drink or two, and a few snacks. Because the hike can take all day to complete, you’ll want to get an early start. When I did it in 2012 I stayed the night in the campground at the base of Borah and left at 5am the next morning. Since the sun isn’t up quite yet you’ll also want to pack a flashlight. For more information on this hike the US Forest Service has prepared a PDF file which can be found here.