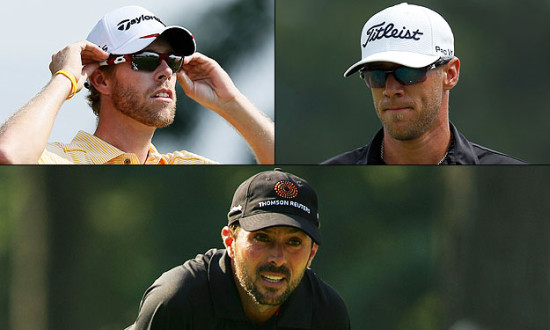 As Canadians, I think we can all appreciate a good playoff beard!  Time will tell if this superstition pays of for these bearded golfers as the weekend progresses...

FARMINGDALE, N.Y. — Canada’s Graham DeLaet and David Hearn appear to be taking a page from countryman Mike Weir’s book this year during the FedExCup Playoffs.

In 2008, the former Masters champ had filmed a PGA TOUR commercial with Wayne Gretzky where the man they call "The Great One" suggested Weir grow a "playoff beard" like hockey players do during the road to the Stanley Cup.

In a case of life imitating art, so to speak, Weir did — although by the time his wife and children arrived for the Deutsche Bank Championship the beard was gone. Weir went on to finish sixth in the FedExCup that year, posting top-10 finishes in three of the four Playoffs events.

Earlier this week, DeLaet and Hearn tweeted about resurrecting the playoff beards.

Time to get these Playoffs going! Bethpage is awesome! Got the beard ripping, didn’t cheat and start 2 weeks ago like @HearnDavid though. @GrahamDeLaet

@GrahamDeLaet had to start early so people could see it!! Haha. Go get em today and lets grow those playoff beards long! #FedExCup #playoffs @HearnDavid

Hearn started The Barclays ranked 108th while DeLaet was two spots higher. Both made the cut on Friday but remain below the top 100 eligible for the Deutsche Bank Championship so they need to play hard this weekend.

Email ThisBlogThis!Share to TwitterShare to FacebookShare to Pinterest
Labels: All posts, PGA Tour